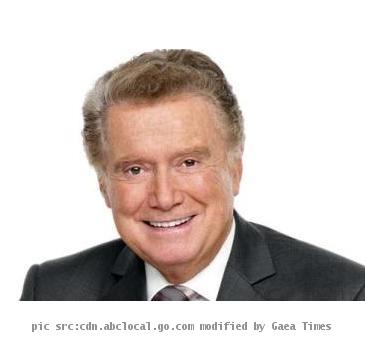 LOS ANGELES (GaeaTimes.com)- On Tuesday, the co-host of “Live with Regis and Kelly”, Regis Philbin announced that he would be retiring from the show by the end of this year. By leaving the syndicated talk show in the early fall or late summer, Regis Philbin would be joining the other veteran talk show hosts like Oprah Winfrey and Larry King, who declared their retirement before. However, the network officials have not yet announced the replacement of Regis Philbin yet.

On “Live with Regis and Kelly”, Regis Philbin told the studio audience at the start of the show that this would be his last year on the show as he is retiring from the post. He also added that it has been a long time that he is in front of the camera and it has been 28 years he is in “Live with Regis and Kelly”. The television personality said that after a certain point of time everything must come to an end for the people who are in front of the camera and for old people like him, things must definitely come to an end. While speaking about Regis Philbin, David Letterman told a reputed media source that television will not be the same without Regis Philbin’s presence.

On the other hand, Regis Philbin’s co-host Kelly Ripa said that nothing in life is “forever”. The gorgeous television personality said that Regis Philbin’s chair might become empty as he is retiring but the wonderful moments that she has spent and experienced with him would always be embedded in her heart and would make him a meaningful part of her life. Regis Philbin’s previous co-host Kathie Lee Gifford said that it had been joy working with him and called Regis Philbin as the ” broadcast legend”.

LONDON - Russell Brand has said that Prince Charles tried to avoid him at a recent event. However, ...

Brit woman shocked to find her identity stolen on Facebook

LONDON - A woman in Britain was left shocked after she found out that her identity on Facebook had ...

His debut a year in the making, Jones makes smooth transition to new country, teammates

WASHINGTON – Today, President Barack Obama announced his intent to nominate the following in...