A R Rahman Fails To Leave A Mark 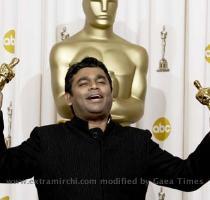 BEVERLY HILLS (GaeaTimes.com)- The Golden Globe Awards this time were a disappointment for A R Rahman as the Oscar winning composer failed to win an award at the 68the Golden Globe Awards which took place last night at Beverly Hills, California. The Indian musician who had earned a nomination at the Awards for the Best Original Score for the movie “127 Hours” had made millions of Indians hopeful that the “Mozart Of Madras” would certainly bag the award.

Fans, however, did not stop cheering for the master musician for earning a nomination in the Golden Globe Awards list itself is a big achievement. It was only two days ago that A R Rahman won the Award for the Best Original Song at the 16th Annual Critics’ Choice Awards for “If I Rise” from “127 Hours”. This time, however, the musician lost out the Golden Globe Award for Best Original Score to Trent Reznor and Atticus Ross who won for “The Social Network”. “If I Rise” has music by A R Rahman, whose collaboration he shares with British pop star Dido who has penned the lyrics for the song. However, it is not alone Dido who wrote the song, instead Rollo Armstrong has also given a hand to it.

The music that A R Rahman has given for “127 Hours” has won rare reviews for its ‘haunting tracks’ and ‘wonderful crescendos’, making fans of the musician hopeful that he would earn it last night as well. However, jury seemed to have a different opinion. This was not the first time that A R Rahman won a Golden Globe nomination. He had also made it to the Awards in 2009 for his music in “Slumdog Millionaire” which was successful in fetching him an award.