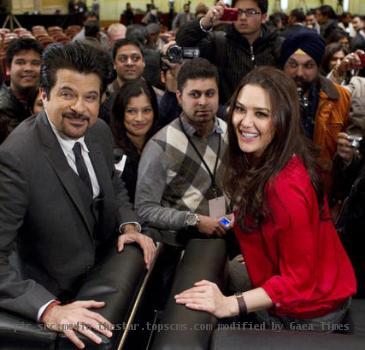 TORONTO, CANADA (GaeaTimes.com)- Bollywood fans in Toronto are going to be in for a huge treat this summer when the much-awaited International Indian Film Academy Awards (IIFA) 2011 would be held in the largest city of Canada. The biggest stars of the Indian film industry would be gracing the event which is being pitched as one of the most high-profile events of Bollywood to be ever held internationally. The event which has been described as the ‘grandest celebration of Indian cinema abroad’ would be held from June 23-25, with as many as 500 A-listers from the Indian movie business likely to attend the film fiesta to turn it into a grand success.

In a news conference that was held on Wednesday, film star Anil Kapoor said, “People are going to love it!” while excitedly adding that the event would be bigger than any of the award ceremony held in the previous years as it would not only comprise of an award ceremony but would boost of everything from entertainment, fashion as well as trade. Moreover, the ‘Slumdog Millionaire’ star also went on to say that the IIFA Awards 2011 would not only provide an impetus to the tourism industry of the city but it would also play a pivotal role in bringing Toronto to the world stage.

According to organizers, the IIFA Awards 2011 spanning across three days would be a celebration of the Indian film industry which would reach its conclusion with the awards ceremony, to be held at the Rogers Centre. This is the very first time that the event would be taking place in North America.

NEW DELHI - After pretending to be a gay in "Dostana" and playing an outlaw in "Raavan", Abhishe...
Copyright© 2011 The Gaea Times