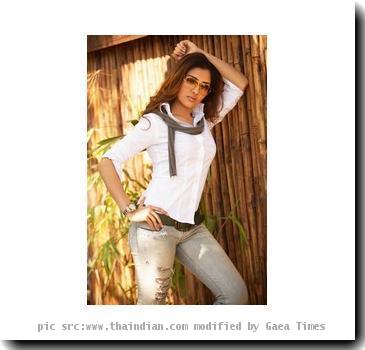 MUMBAI, INDIA (GaeaTimes.com)- The latest star kid ready to take Bollywood by storm is funny man Govinda’s daughter, Narmmadaa Ahuja. In a recent interview the gorgeous future actress said that she did not want a hush hush debut. She also said that before entering the Hindi film industry she wanted to be perfect in every way. According to insiders, she is all set to make her mark in the industry soon.

There were reports that Salman Khan will be launching Govinda’s daughter. The ‘Dabangg’ star and the daughter of ‘Partner’ were spotted together a few years ago at the IIFA Awards and the media has been abuzz with the gossip since then that she will get her first break under the Bollywood Khan. Narmmadaa Ahuja, however, denied the reports and said that she would prefer making her debut with a star who is just one film or so old. She also added that the rumors of a clash between Salman Khan and Govinda are baseless as she never spoke to the ‘Wanted’ star about her debut. She explained that in 2007 she was just 18 and it was too early to think about her debut.

Mumbai- Before stepping into the threshold of Bollywood, Narmmadaa Ahuja, daughter of Bollywood ...

I won't like to debut with a newcomer: Govinda's daughter

Do Knot Doubt: Govinda hopeful of Do knot disturbs success!

Whenever one talks about Govinda, the first thing that flashes in the mind is laughter riot and full...

It seems the fitness bug doesn’t spare anyone. Even though she’s already quite slim and ...

If it were any other newcomer, she would have been frazzled by the onslaught of controversies coming...

She unintentionally created quite a stir when she escorted Salman Khan during the IIFA Awards a year...
Copyright© 2010 The Gaea Times