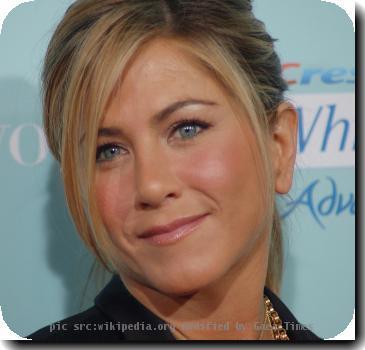 LOS ANGELES (GaeaTimes.com)- Jennifer Aniston has always been a good sport. Whether it is about handling relationship or keeping the audiences glued to her humor and charm, she is always the best. However, on the latest episode of Ellen DeGeneres’ talk show that was aired recently, she perhaps did the most bizarre thing, that someone could ever imagine. On the request of the talk show host, she wore a vibrating bra.

A vibrating bra is a new device that is meant for breast enhancement. No wonder, with the actress reaching 42, she perhaps needs the device to restrain her withering assets from losing its shape. She came to the show to promote her new film, “Just Go With It” but her promotion took a back seat when the host introduced her to this fantasy device and kept in on the table. It was a pair of white pads with a white wire attached to it that would enable the transmission of electricity for its functioning. As the pads started vibrating on the table, all the audiences who were sitting in the set, and those who were watching the show on the TV were nothing but amused to see them dancing on the table top. However, the actress was sporting enough to put them inside her bra, and make the show all more entertaining and bolder than ever before.

Jennifer Aniston is always known for her bold yet subtle comments. With this new experience she said that she was getting a feeling of “being milked”. However, she enjoyed being the first celebrity endorser of the vibrating bra and loved the experience a lot although she initially hesitated before sporting them.

WASHINGTON - New air-flow technology is being tested as engineers feel that the overall design of...

WASHINGTON - Harvard scientists have has reproduced many of the characteristics of real bird song wi...

LONDON - Scientists have developed a new kind of underwater sonar that can detect objects like reefs...

WASHINGTON - Inspired by the sonar capabilities of dolphins, scientists have developed a new underw...

WASHINGTON - Ever wondered how a mother hears the sound of a baby crying at the other end of the roo...

SYDNEY - Qantas Airways has been plagued with more engine troubles after one of its planes carrying ...

WASHINGTON - A team of researchers has developed a power generation technology using bendable ...

LONDON - Tiny bubbles of gas injected into the blood, can ease the passage of vital drugs to the bra...
Copyright© 2011 The Gaea Times