Megan Fox’s Thumb Was Retouched, Or Was Thumb Double Used In Motorola Ads? 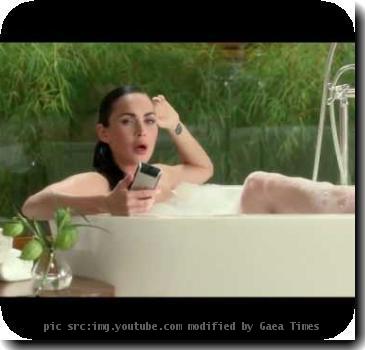 LOS ANGELES (GaeaTimes.com)- An advertisement that was aired during the Super Bowl featuring the sultry actress Megan Fox has created quite a buzz. Among the plethora of advertisements that were aired during the Super Bowl season, this one commercial has specially drawn the attention of observers not merely because it features one of the sexiest actresses in Tinseltown, but rather because it draws attention to one particular part of that fabulously perfect figure, her thumb. After the commercial was aired, it is being wondered whether Megan Fox’s thumb has been retouched or was a thumb double used in the Motorola ads.

It is well known that the otherwise impeccable beauty has this one teeny weeny blemish on herself. She is subject to a condition called “brachydactyly,” which is the Greek, and the medical term for having shortness of limbs, or parts of the same. For the layman, it simply means that Megan Fox has a clubbed thumb. However, the perfection of the thumb that was featured in the Motorola advertisement has led many to wonder about it, and the general consensus is, either Megan Fox had her thumb retouched, or thumb double was used in the Motorola advertisement.

Megan Fox plays herself in the advertisement. She is featured in her trademark sexy avatar, lying in a bathtub among the soap bubbles. On one hand, she sports a Motorola handset, and she is seen wondering what it would turn out to be if she sends a picture of herself after enhancing it with the “Motoblur” feature of the phone. As she works on it, with her thumb, the audience gets a close up view, leading to speculations whether Megan Fox’s thumb was retouched or a thumb double was used in the Motorola ad.