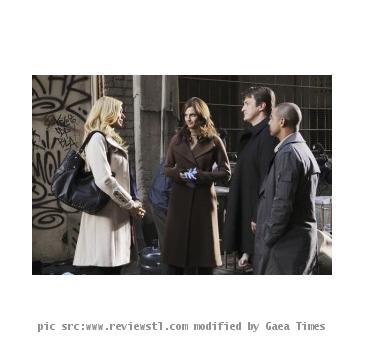 Laura Prepon’s appearance on the show was indeed a pleasant surprise for the viewers. One of the novels written by Richard Castle, played by Nathan Fillion, is being adapted for a movie and the character of Natalie Rhodes has been selected to play the female lead. The role of the actress was played by Laura Prepon, who joins Richard Castle and Kate Beckett in their probe to better understand her character. The 30-year-old actress’ adept portrayal of the role left her ardent fans asking for more. The manner in which the events of the episode unfolded, left the viewers glued to the television screens. The regular viewers of the show throughly enjoyed the interesting twists and turns that the latest segment provided. Viewers are eagerly waiting to see how the upcoming episodes unfold.

The entertainment does in last night’s episode of “Castle” was surely high as the three characters of Richard Castle, Kate Beckett and actress Natalie Rhodes undertook an investigation in the murder case of a high-profile matchmaker. For the Laura Prepon fans, it was the ultimate treat as they were able to witness the renowned actress play the role with much perfection. The ABC show “Castle” made its debut on the network on March, 2009 and since then it has been able to attain high viewership.

LONDON - Judges have declared that Silvio Berlusconi's ally was indeed linked to Sicilian mafia and ...

WASHINGTON - A Californian woman has been charged with aiding a Somalia-based militia with ties to ...

KABUL - Archaeologists in Afghanistan have warned that they are racing against time to rescue a ma...

SAN FRANCISCO (GaeaTimes.com)- The Black Friday is just a few days away and the giant retailers ...

LONDON - A Chinese company digging an unexploited copper mine in Afghanistan has unearthed a sprawli...

LONDON - A team of researchers at the University of Wisconsin-Madison have unveiled an inexpensi...

GURGAON - Laura Davies of England capped a dramatic week that began with a lost golf bag but ended w...
Copyright© 2011 The Gaea Times