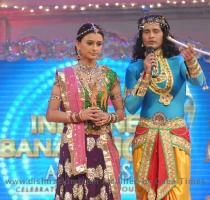 MUMBAI (GaeaTimes.com)- The “India Ne Banadi Jodi” Awards that was aired last night on Sony Entertainment channel witnessed the presence of the entire television fraternity and many from the film industry as well. As evident from the name the event saw a number of celebrities taking on to the stage in the form of the favorite pairs. Yes the event saw India’s most wanted on-screen couples on the stage. The fact that made the event different from all the previous award functions was that the on-screen ‘jodis’ or couples had decked themselves as mythological characters.

Audience after a long time got to saw the eternal pair of Hiten Tejwani and Gauri Pradhan who were not only an on-screen couple but is also husband- wife in real life. The sweetest part to their dancing act was that the pair had adorned themselves as Lord Krishna and Radha. The other popular couples from prime time television shows who put up an act on the stage were Rajashree Thakur along with Sharad Kelkar, Mona Singh and Apoorva Agnihotri. While the former couple had dressed themselves as Parvati and Lord Shiva, Apoorva and Mona turned up as Lord Rama and Sita. One after another these popular on-screen couples with their superb performances enthralled the hearts who were present at the “India Ne Banadi Jodi” function.

Following the performances when the time for the Award for Best Romantic Couple came it seemed like Jay Soni and Ragini Khanna are India’s favorites. Yes the duo who essay the role of Eshan and Suhana in “Sasural Genda Phool” received the Best Romantic Jodi Award of “India Ne Banadi Jodi”. Ragini Khanna adorned herself as a cute princess whereas Jay Soni looked as her perfect Prince Charming.