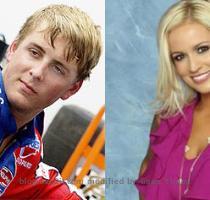 LOS ANGELES (GaeaTimes.com)- Ricky Hendrick will always be remembered as the unfortunate person, who had to leave his last breathe at the tender age of 24, when his plane got crashed in Martinsville, Virginia on Oct. 24, 2004. Although he was very established Nascar race car driver, he will always be more recalled for the unpredicted mishap that took his life. However, it seems that his fiancee, Emily Maynard, will soon overcome the trauma of her lover’s demise and find a new love, as she will be one of the contestant in the new season of the popular dating reality show, “The Bachelor”.

Emily Maynard refused to travel with her lover, on the day of his accident, and saved her life thereby. Yet, she was still very much in love with his memories. Ricky Hendrick expired more than six years back and about two weeks after his death, the beautiful lady realized that she was pregnant with their child, and happily raised her daughter, who is now six year old. She was working as an event planner in Levine Children’s Hospital, and proved herself to be a good single mother. The couple have lived together for more than four years, and got engaged on the same year, when Ricky Hendrick left her forever. They were all set to get married, but unfortunately, tying the knot, did not earn their destiny’s support, and she was widowed, with his posthumous child.

Sources say that is really good that she has decided to get over her past and start a new life. She would be one of the 30 female contestant in the show, where she has to find love with Brad Womack, who is making a comeback in the same show for the second time. Perhaps, she had realized that Ricky Hendrick would never return, and therefore she needs to move on for the better.

Fletcher's 'three mantras' of how to dislodge Ponting

SYDNEY - Australian off-spinner Jason Krejza has quashed speculation that it was because he had f...
Copyright© 2011 The Gaea Times