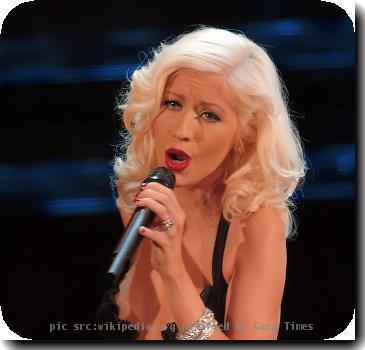 LOS ANGELES (GaeaTimes.com)- It looks like Christina Aguilera and Cher have a winner in their hands even before the release as the soundtrack of their much anticipated movie has already started making waves in the music industry. The album has sizzled on the iTunes charts and is presently in the number 2 position. Christina Aguilera has had a busy week with performances at the AMAs and the finale of ‘DWTS’. The fans not only got a sneak peek into the kind of hip-shaking burlesque moves they will see in the film but also got an idea of the extraordinary vocals that Christina Aguilera provided in the soundtrack of Burlesque.

The buzz around the soundtrack of ‘Burlesque’ increased several folds after the recent performances by Christina Aguilera. Reports have revealed that the album which also features pop icon Cher, was not just meant as a complimentary music (soundtrack) that would enhance the film’s experience but a stand alone album for the fans as well. Christina Aguilera has also been deeply involved in the production of the album and the singer has co-written some of the tracks in the album. Cher has also lent her voice to two brand new songs that have been one of the biggest draws of the album.

With a total of 10 well appreciated tracks in the soundtrack, the album’s success not only marks the return of pop stars Christina Aguilera and Cher but also ensures that ‘Burlesque’ gets all the hype that it needs before release. There are some extraordinary remakes/covers sung by Christina Aguilera for the album which includes Etta James’ ‘Tough Lover’.

LONDON - Bird protection bosses stunned a few visitors after they started a recruitment drive at ...