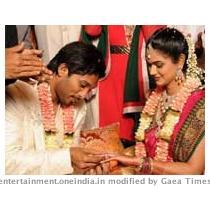 HYDERABAD, INDIA (GaeaTimes.com)- South Indian mega-star Allu Arjun broke hearts of millions of women across the country as he exchanged engagement rings with Sneha Reddy amidst family members and close friends on November 26. The private engagement ceremony took place at the bride’s house in Hyderabad. Though it is unclear from the reports whether the two were dating before or it is an arranged marriage, a source present at the time of the engagement revealed that the couple looked radiant and happy.

In the photos that have emerged on the web so far, the engagement ceremony looked straight out of a Tollywood movie starring Allu Arjun and a gorgeous heroine. Clad in a traditional pink 9-yard sari, Sneha Shetty was seen glowing with happiness at the ceremony. From the photos that have emerged on the s\web so far, it is evident that the parents of the couple and close friends and relatives were by their side at the time of the beautiful ceremony. Fellow super star and cousin of Allu Arjun was also, reportedly, present during the engagement ceremony.

Insiders have revealed that Allu Arjun and Sneha Reddy will tie the knot soon as well. Some reports indicate that the couple could get married in February next year. In spite of the engagement creating a huge buzz among the Allu Arjun fans, the parents of the couple have not yet confirmed the date of marriage yet. Sneha Reddy is the daughter of a well established educationist, Sankar Reddy. She has also completed her MS from a recognized university in the United States.

HYDERABAD, INDIA (GaeaTimes.com)- Telugu superstar Allu Arjun is all set to break millions of he...

HYDERABAD (GaeaTimes.com) -- Arya star Allu Arjun is on the headline today. Not for the release ...

HYDERABAD, INDIA (GaeaTimes.com) -- The Magadheera hero is back once again with his bang. Orange, t...

Komaram Puli gets into trouble

August 13, 2010 (Sampurn Wire): Megastar Chiranjeevi has millions of fans, who can go to any exte...