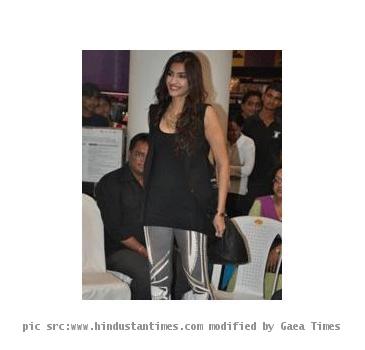 MUMBAI, INDIA (GaeaTimes.com)- It looks like the actress daughter of ace Bollywood actor Anil Kapoor, namely Sonam Kapoor is learning the tricks of trade rather fast. She is just a few films old in the industry but she is not the one who takes criticisms lying down as is evident from some of her recent comments and actions. She is not kind to the people in the film fraternity be it the critics and her co actors when it comes to her choice of films or her much talked about fashion sense. After her home production Aisha which sank at the box office despite much media hype and catchy promotions she got the flak for focusing more on fashion than acting skills. When her co actor from the film ‘I Hate Luv Storys’, Imran Khan gave her feedback on her in a popular talk show she did not take it nicely.

Reportedly Imran Khan said in the popular TV show Koffee With Karan that she could “do more movies, less magazine covers”. Abhay Deol her co actor in the film ‘Aisha’ also said similar things earlier. Sonam Kapoor saw red at Imran Khan’s comment and she retorted back saying that he ” still has a lot to do before he makes statements like that.” when she was asked this question by media she replied that she just did two ramp walks which does not mean she is getting deviated from her acting career.

Sonam Kapoor also said in her defense that there are instances of both Hollywood and Bollywood stars being fashion and style conscious. She also reiterated that she may be now but has worked with the leading Indian film makers.