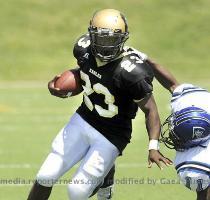 ABILENE, (GaeaTimes.com)- Herschel Sims delighted all the football fans as he appeared on the season finale of the “World Of Jenks” on MTV. Like always, the show gave an insight of the running back’s personal life and professional gains. However, it was revealed that his personal life is not as exciting as his football performances on field. He is a student of Abilene High School and plays for the high school football team, in Texas.

Andrew Jenks took the cameras to his field, interviewed some of his friends and coach. His coach Steve Warren said that there are a lot of young talents in his team, but Herschel Sims works hard. Where every other kid focus on their talent, he strives more to master the work ethics. He has always displayed thunderous performance on the field. However, he also said that his personal life has never been a bed of roses. His step father has always subjected him to child abuse, thrashing him for every small reason. He even thrashed him with an extension chord once. His mother however, could never help in out in this matter. He said, what it takes to lead a life in high school without any parents, as right now, both of them are serving a prison term for child abuse. He has no grudge against his mother, as she was rather helpless herself and wants her to be released soon. He wants to “Have Her Back”, because she has been imprisoned for being an accomplice in the crime of child abuse, and not calling up the police when Herschel Sims used to get beaten.

The climax o the show ended with a happy note as Herschel Sims mother gave her son a surprise visit, when he was playing a match against a Franklington, Louisiana team. The show captured the emotional reunion between the two, that brought tears to the viewers’ eyes. Herschel Sims wants to be successful in his life and wants to play for NFL. He would be joining the Oklahoma State Cowboys in 2011.