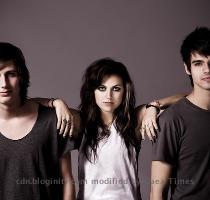 LOS ANGELES, (GaeaTimes.com)- Andrew Jenks will feature Sierra Kusterbeck, in his MTV show “World Of Jenks” all through out this week at 10 PM. Sierra Kusterbeck, a vocalist of the upcoming rock band “VersaEmerge“, will showcase her talent as a rock singer and a performer in this show, apart from giving a vivid view of her personal life and her band. She will share her dreams and struggles to be a leading rock singer in the States.

“World Of Jenks” is a television documentary hosted by 25 year old American filmmaker, Andrew Jenks. Every week, he invites a guest and treats the viewers with a taste of their personal and professional life. The motto of the show is to reveal the ideas and aspiration of promising and inspiring young people of this generation from all over America. The show not only features singers and artists, but also people from other walks of life like, an autism patients, a professional poker player, a homeless woman etc. Sierra Kusterbeck, in this show revealed that she became part of VersaEmerge in 2007, when she was just 16. Although in order to qualify for the audition, she had to lie and increase her age by two years. The band was founded by Blake Harnage and former drummer Anthony Martone, after they parted from MFV. Initially they were hesitant about including her, bot soon Blake Harnage convinced the rest and she became part of it, to make the band a lot more successful.

This week’s episodes of “World Of Jenks”, featuring Sierra Kusterbeck, has been titled as “Holding On To Every Lyric”. It would give a clear insight about VersaEmerge, its aspirations and its experiment with three main genres, namely Alternative, Experimental and early Post Hard-core rock. It would also feature the two other musicians of VersaEmerge, Blake Harnage and Devin Ingelido.