Erin Barry Behind The Eva-Tony Split? 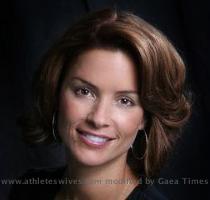 LOS ANGELES (GaeaTimes.com)- It looks like Tony Parker is in one hot soup as the latest reports indicate that the woman with whom he cheated on his wife Eva Longoria, has been identified as the wife of his former team mate and friend, Erin Barry. Eva Longoria has revealed that she had found hundreds of texts in the inbox of her sportstar husband from a woman he earlier had an affair with. The revelation of the third person in the extramarital affair has added a fresh lease of life into the Eva Longoria-Tony Parker split story. One insider reports that the sources close to the couples involved have confirmed the news that Tony Parker’s former San Antonio Spurs teammate Brent Barry’s wife is the woman who the basketball star cheat on his wife with.

The news came as a shock for several fans of the couple and Brent Barry’s father, a former NBA star also spoke to the media about the controversy. He said that he was concerned about his son after hearing about the scandal. He also added that though it was evident that the relationship between the basketball player and his wife, Erin Barry, was heading for a divorce, the cheating scandal involving Tony Parker wold completely devastate him. He explained that he could not imagine him going through this as the news of the divorce was difficult for him.

Brent Barry, the husband of Erin Barry, and Tony Parker have played together for the San Antonio Spurs for three seasons and the two families were reportedly quite close. There is even a photo of the two couples together that has been circulating on the web ever since the scandal broke out.

WASHINGTON - The marriage of Erin Barry, who allegedly exchanged hundreds of texts with Eva Long...

Tony Parker 'only had sexting relationship with Erin Barry'

LOS ANGELES (GaeaTimes.com)- The media was abuzz yesterday with the news that "Desperate Housewi...

Traveller claims she was sexually assaulted during US airport pat down

MELBOURNE - A traveller in the US has revealed how she was left shocked and humiliated by airport...
Copyright© 2010 The Gaea Times