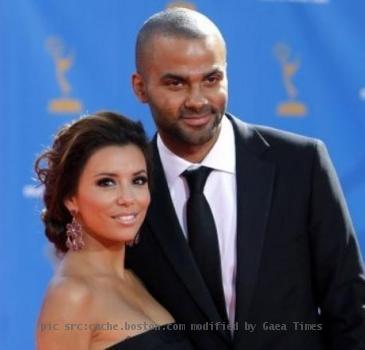 LOS ANGELES (GaeaTimes.com)- The media was abuzz yesterday with the news that “Desperate Housewives” star Eva Longoria Parker and her husband Tony Parker called it quits after three years of marriage. However, the representative of the couple denied the news citing it to be “100% false”. Recent news that surfaced online is Eva Longoria Parker filed for divorce Wednesday citing the reason as ‘irreconcilable differences’. The couple tied the knot on 2007.

A reputed media source reported that in the legal documents Eva Longoria Parker has requested that her name should again be restored to Eva Jacqueline Longoria, her previous name. The court documents did not provide any more details other than the couple’s prenuptial details. A source close to Eva Longoria Parker reportedly said that the actress asked for spousal support but she would not pay anything to Tony Parker. Liza Anderson, the representative of the actress said that Eva Longoria Parker will not comment any further about her divorce.

Some gossip sites reported that the reason behind Eva Longoria Parker and Tony Parker’s divorce is the basketball star’s relationship with Erin Barry, estranged wife of former San Antonio Spur player Brent Barry. Eva Longoria Parker reportedly found hundreds of text messages on Tony Parker’s phone. Liza Anderson said that Eva Longoria is presently “devastated”. However, the representative said Eva Longoria Parker is strong and she would be able to survive through her difficult time. Tony Parker wrote in the homepage of his social networking site that even after staying together for seven years the couple have decided to part their ways. The couple wrote in the homepage of their individual social networking site that they love each other “deeply” and pray for each other’s happiness.