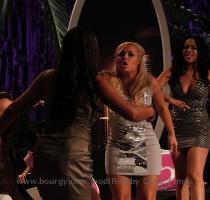 MIAMI, (GaeaTimes.com)- The much anticipated reunion episode of ‘Bad Girls Club Miami‘ had all the reality drama that the fans were hoping for and with Perez Hilton as the host, it could not get cattier. The reunion episode was aired on Tuesday, but the network will also air the second part of the reunion soon. With the girls turning up on the show to settle some old differences, the fights got dirty and ugly and even called for the intervention of the security on the sets.

The ‘Bad Girls Club Miami’ reunion episode did not take time to get tense. Kristen who is known for her tiff with Kayleigh called her fellow cast member fake and alleged that she was not good enough to stand on her own feet. Kayleigh took the insult too personally and started to abuse the white haired ‘Bad Girl’. Kayleigh soon realized that the verbal abuse was not good enough and suddenly started to hit Kristen. the security at the studio stepped in at this point and controlled the situation.

The ‘Bad Girls Club’ Miami has been one of the most watched shows on Oxygen Network and going by the reviews that the reunion garnered, it looks like part two of the cat-fight fest will have a huge viewership as well. For fans of the show the reunion episode also provided an insight into the real relationship between the girls. The two-faced characters of some of the members of the cast were also exposed and gossip expert Perez Hilton ensured that the drama never died down for a second in the studio.