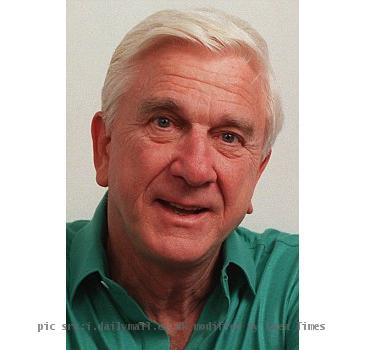 FORT LAUDERDALE (GaeaTimes.com)- Leslie Nielsen, the actor who won the hearts of million viewers by acting in “The Naked Gun” series passed away on Sunday. The representative of the veteran television and movie actor, John S Kelly reported that Leslie Nielsen breathed his last in hospital near his home in Fort Lauderdale, Florida. John S Kelly also reported that the actor lost his battle against pneumonia. He was 84 year old.

Leslie Nielsen’s family released a statement where it was stated that the family members are saddened by the unfortunate demise of the actor. The family statement also read that Leslie Nelson will be best remembered as ‘Lt. Frank Drebin’ in “The Naked Gun” series. Leslie Nielsen’s family said that the actor enjoyed his career in motion pictures and televisions for sixty years. Doug Nielsen, the nephew of Leslie Nielson said that with his friends and wife by his side, the actor passed away. His nephew also said that Leslie Nielsen has been in hospital for 12 days.

Doug Nielsen said that Leslie Nielsen was a nice person and he was caring. Doug Nielsen remembered his uncle saying that he was a funny man in his real life as well. He said that Leslie Nielsen was one of his best friends and he would miss his uncle dearly. Leslie Nielson is famous for his role of “Airplane!” which made him a household name. It was in this role that he became known for the line “Don’t call me Shirley”. Leslie Nielson was nominated twice to Emmy Awards for his comedy series “Police Squad” and for his guest appearance on “Day by Day” television series. He is survived by his wife, two daughters and brother. His family has not yet announced the funeral yet.

Regular exercise 'keeps dementia and other diseases at bay'

WASHINGTON - A new study has suggested that regular exercise could reduce the risk of developing a...

WASHINGTON - A new study has suggested that young mice separated from their mums for longer period...

MUMBAI - Legendary singer Asha Bhosle has been roped in as the goodwill ambassador for the upcoming ...

Remarks by the President at DNC "Moving America Forward" Rally in Chicago, Illinois

Anti-piracy initiatives to be recognised at Music Awards

MUMBAI - A unique Best Anti-Piracy Initiative award will be given at the Chevrolet Global Indian Mus...

Action 'needed to save archaeological sites threatened by rising seas'