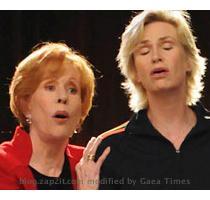 LOS ANGELES (GaeaTimes.com)- Carol Burnett turned up on Tuesday night’s episode of ‘Glee’ as Sue Sylvester’s mother. The hilarious episode also showcased the singing talent of the talented comedian. It was a special night for the Gleek as Kurt and Finn were seen getting hitched. While Finn and Kurt’s families got together for the Glee wedding of the week, Carol Burnett stole the show as one of the most highly anticipated guests on the show this season.

Carol Burnett played the role of Doris Sylvester, Sue Sylvester’s mother who is also a Nazi hunter. Doris Sylvester even managed to steal the limelight from her own daughter as she arrives in town to solve Sue Sylvester’s love-life issues. With her typical sharp tongue and imposing personality, Doris Sylvester tries her best to get her daughter out of the emotional mess. The mother-daughter duet of ‘Ohio’ from the 1953 classic ‘Wonderful Town’ was an absolute delight for the fans and also one of the highlights of the show. The two were also seen bickering in the interlude when Doris Sylvester made some harsh remarks about her daughter’s singing.

Multiple Emmy and Golden Globe Award winning TV veteran Carol Burnett has been one of the best known faces on TV in the 80s and 90s. She has also made several appearances in films over the decades. After becoming a hit on Broadway in the 50s, Carol Burnett moved on to TV and started her own show called the ‘Carol Burnett Show’ that aired on CBS from 1967-1978. The show established Carol Burnett as a comedian and a media personality.