“The Warriors In Pink” Joins NBC 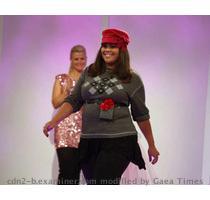 LOS ANGELES (GaeaTimes.com)- Warriors in Pink symbol is regarded as the greatest strengths of the warriors, in the fight against breast cancer. Since 1995, Ford has been striving for the cause, through this campaign and has gained a recognition on international domain. However, nothing works better than being promoted by the media, that assures a strong boost in its PR and popularity. Recently, the popular NBC show, “The Biggest Loser” promoted this cause and mission.

The show featured a fashion show starring all the contestants of “The Biggest Loser” sporting the “Warriors in Pink” clothing line. Every bit of money collected from this event was given to the Susan G. Komen Breast Cancer Foundation, an organization, that treats breast cancer patients. Warriors in Pink, with the help of Fords, has so far collected $ 1.4 million for the organization so far. They also say, that the moment someone buys a stuff from this clothing line, she indirectly contributes to the cause and becomes one of the warriors herself. By the end of the show, the contestant who performed best for the day’s challenge was gifted with a 2011 Ford Edge.

Warriors in Pink aims to bolster the goal of the Ford Company. The mission conveys that every individual has the power to combat the disease and bring about a change. The company thought of taking up this cause because breast cancer has become a growing concern amongst all women around the globe, and calling for a more rigid campaign was crucial. The company helps the Susan G. Komen Breast Cancer Foundation by selling the “Warriors in Pink” Clothing line that is available in every Ford Care domain. The show simply contributed in increasing the popularity on this line, thereby boosting the intensity of the cause.