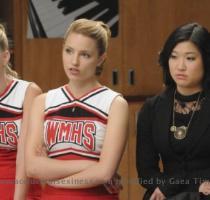 LOS ANGELES (GaeaTimes.com)- Tuesday night’s episode of ‘Glee‘ was marked by two weddings, some great promises and a lot of bullying and drama. The guest star on the episode named ‘Furt‘ was Carol Burnett who played the role of Sue Sylvester’s mother. The highlight of the show was, however the wedding between Kurt’s father and Finn’s mother that really brought the two families together. Sam was also seen taking things to the next level with Quinn. He gives her a promise ring but the lady is not willing to sport it as yet.

In the bullying drama in ‘Furt‘, Kurt is still seen bullied by Karofsky but this time the girls stand up for him. The girls convince their boyfriends to stand up to ‘Glee’ bully Karofsky. While most are reluctant to fight Karofsky, Mike and Artie stand up to the challenge. Soon the drama takes a more violent turn as Karofsky sends Mike flying into Artie who falls from his chair. To the amazement of the audience, Sam takes matters into his own hands and teaches Karofsky a lesson. Later when Kurt and rest of the guys are practicing for New Directions, Karofsky is seen harassing Kurt.

Burt finds out from Kurt that Karofsky has been threatening to kill him. He quickly took matters into his own hands and confronts Karofsky. He uses his brawns with the bully and pins him to the wall with his elbows in a rare display of violence in ‘Glee‘. Later he also informs Sue Sylvester about the problem and insists on Karofsky’s expulsion. Sue Sylvester (who also marries herself in ‘Furt‘) understands the problem as she was a victim of bullying herself and soon Karofsky is expelled.