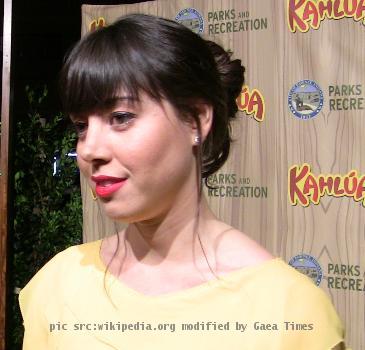 LOS ANGELES (GaeaTimes.com)- ‘Parks and Recreation’ star Aubrey Plaza might appear like the typical funny side-kick on the show but the actress has her hands full with another big screen option that could catapult her into stardom. While many have called her the series’ secret comic weapon, many are looking forward to seeing the actress in new light in the DVD release of season 2 of ‘Parks and Recreation’, especially after the reports of Aubrey Plaza bagging the lead role in the yet to be produced ‘The Hand Job’.

The script for ‘The Hand Job’ made it to the 2009 Black List of best unproduced screenplays and going by the rest of the cast that have been called in for the production, it looks like it could turn out to be a winner for Aubrey Plaza. In October, Aubrey Plaza appeared with the rest of the stellar cast at the Austin Film Festival and read out the screenplay of ‘The Hand Job’ to prove what a great venture it could turn out to be. Among some of the stars who have pinned their hopes on the film there is Hollywood hottie Jessica Alba, Daryl Sabara, Colin Hanks and Alexa Vega.

Reports indicate that Aubrey Plaza will play the lead role if the script of ‘The Hand Job’ manages to find a financing. The plot of the film revolves around a high-school grad, played by Aubrey Plaza, who decides to get some sexual experience before heading to college. One source describes the story as a coming of age drama about a sexually curious woman and claims that the twists range from the hilarious to the downright raunchy in the high-school comedy.