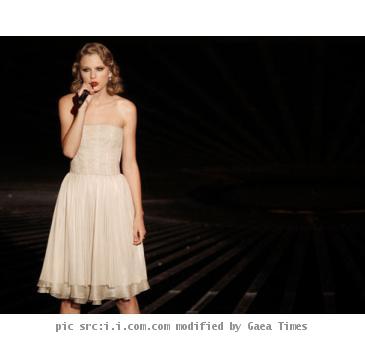 NEW YORK (GaeaTimes.com) — When Taylor Swift took on the Video Music Awards we bet that Kanye West was on her mind. The lyrics of her new song “Innocent” took us back to the last year’s award night when Kanye West mentioned that Beyonce Should have won Taylor’s award during her acceptance speech.

In a performance preceded by a video montage recalling the untoward incident she went on to sing her new single “Innocent“. The lyrics of the song were quite self explanatory about the references it was trying to make. The lyrics included lines like

Who you are is not what you did.

32 is still growing up now … you’re still an innocent.

I hope you remember today is never too late to be brand new.

There were speculations regarding Kanye West’s performance scheduled later. While he did his best to avoid addressing the incident directly, his performance included the rap about his behavior recently. He rapped

I always find something wrong; you’ve been putting up with my (censored) for too long

He went on to a chorus that was so full of expletives that it is quite unprintable.