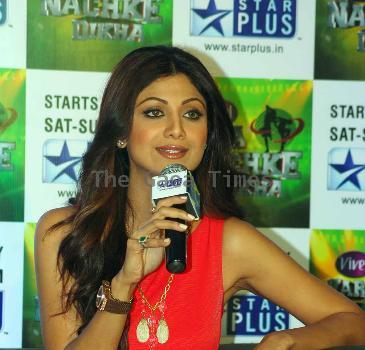 April 21, 2010 (Sampurn Wire):Shilpa Shetty-Kundra is never known to be a diplomat. Throw a tricky question at her and she’s bound to come up with a gaffe. Perhaps, that explains why she was an easy prey at Big Brother.

She may be married to NRI businessman but that hasn’t brought about any diplomacy in her. The actress continues to speak from the heart. This was evident at the press conference of Zara Nachke Dikha 2, a show which Shilpa is adjudicating.

Shilpa and her hubby Raj Kundra are among the co-owners of IPL team Rajasthan Royals. As always, some scribe came up with a weird query. This time the lady was asked why her hubby isn’t there in the show.

Hiding her displeasure over the question, Shilpa looked towards Star India EVP marketing and communications Anupam Vasudev and sighed, “Star Plus cannot afford my hubby (laughs). With the money that’s on offer, the channel can only afford me (itne paise mein, main hi aaongi).”

On serious note she adds, ‘No, he won’t be coming on the stage anytime.”

Shilpa’s jokes didn’t end here. Later on, her co-judge Vaibhavi Merchant was answering a query on how big or better the show is, Shilpa butted in to say, “Apart from what Vaibhavi mentioned, people and we too as judges are curious to know what Rakhi Sawant will say this time and what new drama will she create.”

Couldn’t agree more with you Shilpa! The firebrand Rakhi will certainly be up to her dramatics all over again.