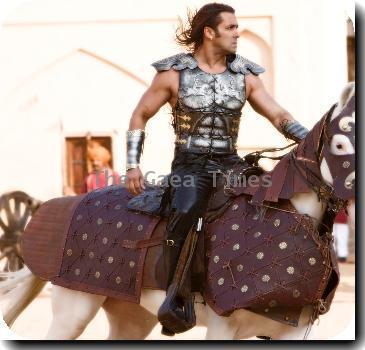 He’s bachelor, he’s muscular and he indeed can dance saala…yes we are talking about none other than dashing Salman Khan who recently got two big hits namely Wanted and London Dreams in his kitty.

And his brainchild Veer is all set to hit the screens. Salman claims his new venture all about father-son relationship and is leaving no stone unturned to promote the film.

In a candid interview with us, Salman Khan speaks about Veer, his beautiful relationship with father Salim Khan also the co-writer of Veer and his love for kids. Here we go,

Veer is your third venture as a co-scriptwriter post Baaghi: A Rebel for Love and Chandramukhi. When did the idea cross your mind and what made you write a period film like Veer?

The idea crossed my mind when I was 25 years old. I was so excited about the concept- I desired put on canvas by myself. Due to financial constraints for such films need big budget to support, I could not fulfill my dream. Years passed by but passion to make Veer didn’t fade away with them. Eventually when I felt- the story should be shared with the audience I showed the script to the producer Vijay Galani and readily agreed to do it. Moreover, the original script was too lengthy which was re-scripted by my father Salim Khan (scriptwriter). One common factor between Baaghi and Veer is- both stress upon the beautiful relationship of father and son.

Interestingly, rumours of Veer inspired from the novel Taras Bulba are doing rounds, what do you have to say on that?

No, Veer is an original concept though I have read the novel when I was five years old. And I do remember the beautiful relationship there too in the novel which might again be the common factor.

Which are your favourite period films made in Hindi Cinema?

Pause, ponder…so far there are only three classic period films which I feel are par excellence. Mughal-e-Azam, Dharmveer and the last definitely not the least Veer.

What is Veer all about?

Veer is primarily an epic drama but it also highlights the relationship of father-son. I can’t say beyond this. I would rather want audience to decide for themselves.

In the times when female-actors prefer zero-figure to retain in the competition out there; you suggested Zarine Khan the debutant actor to put on weight? Why?

It was necessary as yesteryear’s princesses had voluptuous bodies considering the royal families they belonged to (khate pete khadaan se hote the bhai) chuckles. So, Zarine’s character demanded her to put on some kilos.

How was it working with Mithun Chakraborty and Jackie Shroff with whom you are working after a long time?

Oh, it was fantastic! We had a blast working together after a long time. Both of them are gem of a people and terrific actors. They are quite senior to me as well. And I must admit that Mithun Da is world’s best chef.

Whats your take on the music of the film?

Veer is an epic film so we have to adhere to the sounds of that era. And I think music director Sajid-Wajid had done justice to the music. The duo is really talented. The music is very close to my like the film.

Who is your Veer in real life?

A person who can bear Rakhi Sawant is a Veer in real terms (laughs). Well, on a serious note, my father is a real Veer as he has always faced tough times with courage and I salute him for that.

Talking about your father, you said Veer is a story of father-son relationship. Share some fond memories of you with your father which still bring smile on your face?

(Smiles), Humm, I remember I was small when I flunked in maths. I was terrified to face my father and disclose the fact to him. Somehow I gathered guts to tell him; to which he politely reacted and told me not to worry and spoil my vacations. Exams are not the real test. Still, ‘beta agli baar zara dhyaan se padhna’ (be careful next time and study).

You are extremely fond of kids; are plans to marry and become a father in near future?

I like being with kids and definitely would love to be a father and I’m sure I will make good father but can’t promise if I can make a good husband.

When entire Bollywood is eating, breathing and sleeping Blogs, you too have been a part of it since a long time now. How has been your experience so far?

It has been fabulous! I love to connect with my fans. Like other Bollywood celebrities, I don’t concentrate on vocabulary and flowery language much as it leads one to deviate from the core topic. I write in a spoken language which you could make be understandable. I personal read all the comments of my blog and also address with the same sincerity. I’m enjoying blogging.