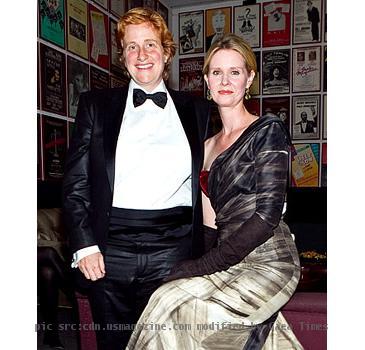 However, the representative did not divulge any more details about the baby and her mother. Moreover, nothing about the biological father of the child has been revealed. Moreover, the couple kept the pregnancy of Christine Marinoni under the wraps for a long time and did not reveal anything about it. Cynthia Nixon was living in with her long term boyfriend Danny Mozes, when she was first introduced to Christine Marinoni at an education rally in 2002. The actress, then parted ways with Danny Mozes in 2003 and announced about her relationship with Christine Marinoni in 2004.

In one of her previous interviews, Cynthia Nixon said that she feels she is lucky to be with Christine Marinoni. She also stated that her partner is amazing with her kids and she makes the family better each and every day. The actress said that she fell in love with her partner in a “sexually neutral” way and she feels that a person like Christine Marinoni is “undeniable”. Cynthia Nixon has two children Samantha, 14, and Charles, 8, from her previous relationship. The actress said that she does not find anything shocking and strange in loving a woman.

WASHINGTON - A new study has found that kids with Chronic Kidney Disease (CKD) are more likely to ha...

LONDON - Gone are the days when women relied on men to make their life complete and secure. Now, i...

How to practice 'safe stress' during the holidays

WASHINGTON - Those who feel stressed, lonely and anxious during holidays can take a breather, for ex...

MELBOURNE - Supermodel Lara Bingle is the new face of Speedo Beach - the lifestyle sister to Spee...

In US labour market, many long-time unemployed lose hope

WASHINGTON - There are people in the US who have given up almost all hope of ever finding a job agai...

Elle Macpherson 'was the inspiration behind Billy Joel's Uptown Girl'

LONDON - A new book has revealed that Billy Joel's hit song 'Uptown Girl' was not about Christie Br...

WASHINGTON - Republicans were projected to win control of the US House of Representatives in a lands...

Early Republican wins in US election

WASHINGTON - Republicans were projected to win a series of early races as polls closed in US congres...
Copyright© 2011 The Gaea Times