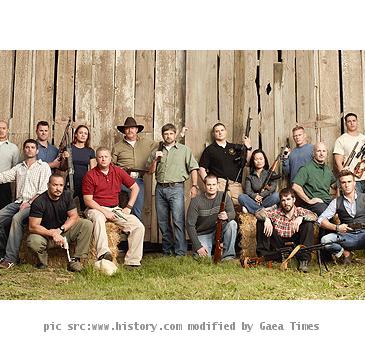 LOS ANGELES (GaeaTimes.com)- The History Channel premiered yet another shooting based reality show, “Top Shot” Season 2 yesterday. Like its preceding season , even “Top Shot” Season 2 has sixteen contestants, whose age vary between 23 to 46. However, all of them have one thing in common and that is passion for shooting.

The youngest contestant for “Top Shot” Season 2 is Jamie Franks, 23. He is a rescue swimmer and has been the winner of several state level competitions in shooting. He bagged the Navy/Marine Corps achievement medals four times. The eldest competitor of this season is 46 year old Eric Anderson, who is a certified hunting safety instructor in Florida. He also holds an expert badge in pistol and rifle and has been a proud recipient of the Police Academy Top Shooter trophy. The only two female contenders for this season are Maggie Reese, 31 and Athena Lee, 32. The former has 13 years of experience in shooting and has been the winner of several regional 3-gun matches. She has also been the USPSA Multigun Ladies Open National Champion in 2009 and 2010. Athena Lee, on the other hand, won the same competition in 2002 and 2007 and has been the IPSC World Shoot Open Women’s Champion in 1999 and 2008.

In the first episode, all the sixteen contestants were divided into two teams, Red and Blue. They had to face three challenges in the first episode of “Top Shot” Season 2. The first round resorted to sharp riffle, where all the contenders had to shoot at a 10-inch target, from a distance of 200 yards, while the two shooters, who made it closest to the bull’s eye, were authorized to picked their teams. The Team Challenge involved shooting with a M1911 pistol, at billiard balls, numbered from 1 to 8, in ascending order. The Elimination challenge involved shooting at hanging targets with the help of a Smith & Wesson Model 29 .44 Magnum revolver, after which Bill Davis, 44 was eliminated.