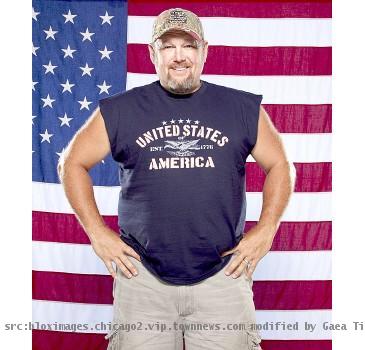 LOS ANGELES (GaeaTimes.com)- The History channel treated the audiences with a very enlightening show, “Only In America Larry The Cable Guy“. The show premiered on February 8, at 8:00 p.m, to reveal the numerous unsung history of the nation, with an aim to establish the variation and richness of American past. The show would be hosted by the very popular comedian, Daniel Whitney, who is popularly known by his onscreen name, ‘Larry”.
“Only In America Larry The Cable Guy“, will feature three or four segments in each episode, discussing about the folk lores and the local histories, which eventually translated into the typical ethos, folkways and mores of that particular county. For that, he would travel to almost each and every county, along the coast and the mainland, to hunt the history of America. David McKillop, the senior Vice President of History channel, said that right from the beginning, the show was named after the host, as they never considered anybody else to host it. According to him, he was the only person, who could no justice to the personality and format of “Only In America Larry The Cable Guy“. He also added that the host has a natural and inherent inclination towards history, and garners intense knowledge about many places. He also takes extra effort to know more about the places that are going to get featured in the show. This trait on the part of the host, makes him the most suitable one.

The pilot episode of “Only In America Larry The Cable Guy“, was entitled as “Larry Makes Moonshine”, where he visited Dawsonville, to know more about the moonshiners and how it led to the tradition of NASCAR driving. In the course of the show, he was paid a surprise visit by the legendary NASCAR driver, Bill Engvall.