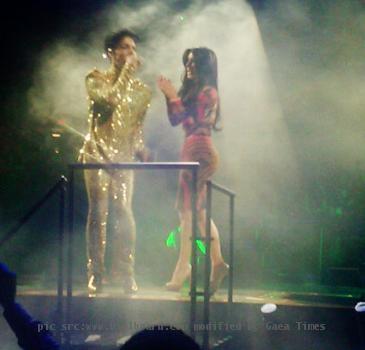 NEW YORK (GaeaTimes.com)- It was the much anticipated concert of veteran pop musician Prince at NYC’s Madison Square Garden on Monday. The fans of the renowned singer gathered at the venue to listen to their favorite singer and the guest list included American hottie Kim Kardashian. The sultry socialite was completely mesmerized by the performance of the singer and during his performance, Prince pulled Kim Kardashian on stage. The “Keeping Up with the Kardashians” star, however, was so nervous that she froze on the stage and could not dance with the “Purple Rain” singer.

Kim Kardashian took to Twitter just after the concert to share her experience with her friends and fans. The celebutante wrote that she was shaking with nervousness when Prince pulled her up on stage. Moreover, Kim Kardashian also wrote that she was so nervous and uneasy that she almost froze on stage and could not move when Prince touched her. However, it seems that the pop star could understand her initial stage fright as Kim Kardashian was actually standing still with him and hence he asked her to “get off the stage”.

On the other hand, Kim Kardashian again joined Prince on stage few hours later. The voluptuous socialite, in the homepage of her social networking site stated that she went up to the stage, again and at this time she “redeemed” herself. Kim Kardashian also stated that everybody on the stage danced as Prince played the piano. The “Disaster Movie” actress’ boy friend Kris Humphries also took to social networking site to state that his lady live got shy on stage when Prince called her.