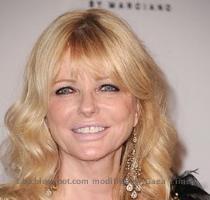 LOS ANGELES (GaeaTimes.com)- Even though myth has it that time mars beauty but with such magical inventions like botox and plastic surgeries in the 21st century, the myth seems to be getting somewhat unruled. Recently 63 year old former model and actress Cheryl Tiegs appeared on “The Oprah Winfrey Show” where her looks left one question on every body’s lips that how does she maintain her beauty so perfectly even after crossing sixty.

The popular talk show last night saw not only Cheryl Tiegs but three other beautiful ladies including Beverly Johnson, Stephanie Seymour and Christie Brinkley who joined the former for a discussion about modeling, something that all of them share in common. As they engrossed themselves in the discussion where the four talked about how modeling was at their time to how the profession now has become they restrict themselves from taking up one favorite topic which is nothing else but the aging process. It seems to be the biggest fear of every human being especially the ladies, and this is what Cheryl Tiegs asserted on the show last night. She said that every one of us just loves to look at ourselves in the mirror and whenever we see a wrinkle, it immediately leads us to panic.

As the former model discussed about aging, many could not but help themselves of recalling the rumors which claim that Cheryl Tiegs went the artificial way for getting the right looks at this age. Rumors have it that Cheryl Tiegs opted for plastic surgeries, although the still so young looking Cheryl Tiegs has never admitted of it. Buzz in the tinsel town has that she owes her glamorous looks to botox, lip injections and cheek implants.

LONDON - "Harry Potter" writer J.K. Rowling has been voted as the most inspiring businesswoman. ...

LONDON - Singer-actress Selena Gomez is a huge fan of Girls Aloud star Cheryl Cole and dreams of re...

Cheryl Cole and David Beckham have the 'most perfect faces'

LONDON - David Beckham and Cheryl Cole have been voted as having the 'most perfect faces' in a poll....

LONDON - Singer Cheryl Cole thinks her shoulder blades are her best features and likes to show them ...

LONDON - Beautiful Cheryl Cole has confessed that she doesn't like to pose for the camera. Cole to...

WASHINGTON - Celebrity-couple relationships always seem to suffer and it is believed that spendin...

LONDON - Louis Walsh, the judge of British reality show "The X-Factor", has been keeping a close eye...
Copyright© 2011 The Gaea Times