Madonna is too ‘Boring’ for his Show says Piers Morgan 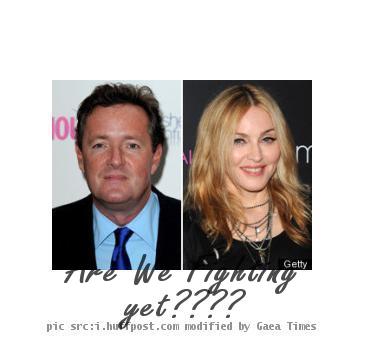 LOS ANGELES (GaeaTimes.com) — Throughout her entire career as a POP icon, Madonna has been called by various names by her co-artists, media and her fans. But rarely anyone has called her ‘boring’! But, Piers Morgan, who is soon going to take over Larry Kings, has described Madonna as a boring performer.

When Piers was asked about who he will have on his upcoming CNN show called Piers Morgan Tonight, the former America’s Got Talent judge said,

We have Lady Gaga, so now Madonna is banned from my show.

The 45 year old host also said that he thinks Madonna is ’so boring’ and that she is ‘too vegan for TV’.

Interestingly, when Madonna was asked for a reply to Piers Morgan’s criticism, Madonna simply said she doesn’t know anyone name Piers Morgan. But she also acknowledged that she is great fan of Lady Gaga at the same time. Seems the Pop queen hasn’t lost her touch yet!

What do you say folks? Is Madonna getting old and boring? Will she been soon overthrown by Lady Gaga? Do feel free to comment!

Madonna's gym plan a way of getting back at former fitness trainer?

NEW YORK - Queen of Pop Madonna has recently announced that she plans to open a series of Hard ...

Madonna 'replaced by Victoria's models for Dolce and Gabbana Spring 2011'

NEW YORK - If reports are to be believed, then Madonna, who had been campaigning for Dolce and ...

Madonna has new guest in her home-lice

Madonna was a lonely teen too

LONDON - Pop queen Madonna has taken a stand against bullying, insisting she is "incredibly ...