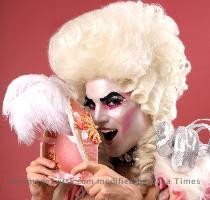 SAN FRANCISCO (GaeaTimes.com)- ‘America’s Got Talent’ and there is no better way to prove the statement than Prince Poppycock’s performance on the last episode. The man appeared in long brown hair with a grunge look in the pre-performance area. The obvious expectations from such contestants was a rock or metal song but Prince Poppycock’s stage appearance in itself was a shock to the audience an judges. The drag queen in a perfect costume and meticulous make-up did impress visually but it wasn’t until he started to sing that the actual talent was revealed. Prince Poppycock sang a note-perfect version of ‘Figaro’ and made the audience and judges experience his genius’ talent.

The gestures and theatrics that accompanied the performance also showed the hard work and dedication of the artist towards his art. After the performance, Sharon Osbourne stood up and threw the papers in her hand to show her appreciation of the talented young performer. She called his performance ‘magnificent’. Piers Morgan said that he didn’t expect such huge talent and was really overwhelmed by the performance. Howie Mandel called Prince Poppycock ‘great’ and said he loved his passion.

The hugely talented performer had been slugging it out in nightclubs before getting a break on ‘America’s Got Talent’. His performance o ‘Figaro’ in white make-up and a woman’s costume did reassert the old proverb of not judging a book by its cover. Among other fabulous performances, the one by ‘Fighting Gravity’ saw the audience awe-struck at the gravity defying men. Both Prince Poppycock and ‘Fighting Gravity’ were selected by the judges to perform in Las Vegas on the bigger platform.