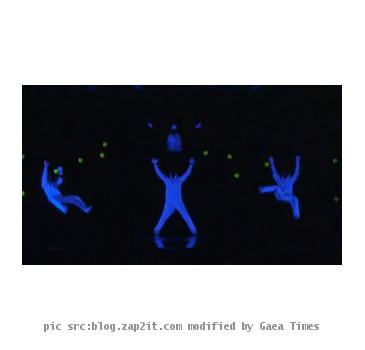 LOS ANGELES (GaeaTimes.com)- “America’s Got Talent” witnessed “Fighting Gravity” dancing in the dark with utmost perfection in the Tuesday auditions. Reportedly, the group of fraternity brothers; “Fighting Gravity” were clad in their trademark glow-in-the-dark hoodies and carried tennis balls which happens to be an important accessory in their performance.

“Fighting Gravity” is a group where each and every performer happens to be college going students studying engineering or business. “Fighting Gravity” members told the judges that they have never been into any kind of professional dance classes. What they perform is a figment of their imagination. They are happy to be a part of the show which they feel is one of the very best talent shows in the country that welcomes all new and upcoming talents with open arms. Before “Fighting Gravity” hit the stage, “America’s Got Talent” host Nick Cannon asked the audience to put out each and every light in the building so that the environ can be the right one for the dancers to perform. While they danced, the “Fighting Gravity” members were wearing their glow-in-the-dark hoodies and the tennis balls acted as chains that linked each and every dancer of the group to one another.

The performance was enchanting and took the audience and the crowd by its charm. All eyes were glued on the stage as “Fighting Gravity” depicted their unique talent before one and all. Judge Howie Mandel at the end of the performance said that it was one of the very best talents on the show. Joining him on the same line was unsparing Piers Morgan who couldn’t refrain himself from congratulating “Fighting Gravity” for their performance which he felt was an extraordinary one.