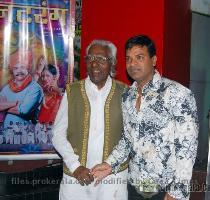 NAGPUR, INDIA (GaeaTimes.com)- Maharashtra is mourning over the demise of one of the most renowned and ace theater personalities Vitthal Umap, who left for the heavenly abode after collapsing on the stage during a function in Nagpur late Friday. His demise occurred at the age of 80, to leave several theater lovers with tears in their eyes.

The mishap happened, when Vitthal Umap was attending a function that launched a private television channel, called Lord Buddha, in the city. He went there as a chief guest. As he went up on the stage to pay a homage to the statue of Lord Buddha, raising a slogan of ‘Jai Bhim’, he fell on the stage. The stage volunteers immediately rushed him to the nearby Spandan Hospital in Dhantoli, where the doctors declared him dead due to a massive cardiac arrest. Aman Kamble, the program organizer, said that the ace artist was suffering from ill health for the last few days. However, when he heard about the launch of the new channel about fifteen days ago, he not only agreed to attend it as a chief guest, but also decided to perform for the event. Vitthal Umap also told them that this would probably be his last on stage performance as his is no more permitting him to perform like before. Two of his sons arrived at the hospital to take his body back to Mumbai to perform the last rites.

Vitthal Umap had a progressive outlook and was gem of Maharashtrian theater. He was a singer, lyricist, writer, actor and a social activist, who fought for equality. Chief Minister Prithviraj Chavan expressed his regret, saying that he served the theater stage until his last breath. Although he was 80, his energy and zeal was capable of putting any youth to shame. His death left a permanent impression on the cultural scenario of Maharashtra, added Prithviraj Chavan.

NEW DELHI - The Cabinet Monday cleared a bill to protect whistleblowers and it is likely to be t...

Bangalore doctors to operate an infant born with four legs

MUMBAI - In a bid to erase the stereotyped pot-belly image of the Mumbai cop, the police have introd...

Shiv Sena has no role in separate Vidarbha: Bal Thackeray

MUMBAI - Shiv Sena supremo Bal Thackeray has said his party has no role in the bifurcation of Mahara...

Syrian film 'The Long Night' gets top honour at Osian's

NEW DELHI - Syrian director Hatem Mohammed's "The Long Night", about political prisoners, got the b...

NEVADA - India is already doing "Chiggy Wiggy" with Kylie Minogue, although the film "Blue" for whic...
Copyright© 2010 The Gaea Times