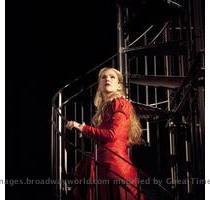 NEW YORK, (GaeaTimes.com)- Lily Rabe is going through a hard time after her mother, Jill Clayburgh, took her last breathe on November 5. She was supposed to perform in the latest Broadway buzz, “Merchant Of Venice”, which will be presented in the Broadhurst Theater this fall. She plays the role of Portia in this particular play.

However the latest news say that the Lily Rabe is quite stressed and due to her familial problems, she will stay out of the performances for sometime. The role of Portia will be temporarily played by Kim Martin-Cotten. The opening day of the play, which was scheduled on November 7, was initially reported to be delayed till November 15. However, now it has been revealed that performance of November 7, will go as par the schedule with Kim Martin Cotten. Other important roles will be played by Al Pacino as Shylock, Byron Jennings as Antonio, Gerry Bamman as Duke of Venice, David Harbouras Bassanio and Seth Numrich as Lorenzo. Some of the caste has been altered for this particular play. The scenic design of the play will be created by Mark Wendland, Jess Goldstein will be in charge of the costume designing, Kenneth Posner will take care of the lightings. its music has been composed by Dan Moses Schreier, and will be designed by ACME Sound Partners.

“Merchant Of Venice” is one of the best plays by Shakespeare and revolves around the conspiracy of Shylock, who wants Antonio’s “pound of flesh”. It is marked by a deep sense of prejudice, where Portia comes as a rescue, So far, Lily Rabe has played the role with the conviction required for the character. Now one has to wait and see how Kim Martin Cotten molds herself into the character and brings life to it.

LONDON - A Japanese technology firm has come up with a concept that sees humans in the future living...

Lily Allen on the road to recovery

LONDON - Lily Allen, who was hospitalised for septicaemia just days after losing her second baby, wa...

WASHINGTON - Just days after announcing she suffered a miscarriage, Lily Allen has been hospitalized...

Lily Allen thanks fans for support

LONDON - Singer Lily Allen has thanked fans for their support after she suffered a miscarriage. ...

Lily Allen thanks fans for supporting her after child loss

LONDON - Lily Allen, who lost her second baby in two years, has thanked her fans for their support f...

LOS ANGELES, (GaeaTimes.com)- Pop- star Lily Allen again once again went through yet another u...
Copyright© 2010 The Gaea Times