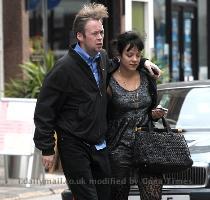 LOS ANGELES, (GaeaTimes.com)- Pop- star Lily Allen again once again went through yet another unfortunate miscarriage. The singer was six months pregnant, with her boyfriend Sam Cooper. The couple were expecting a baby boy in May. This is the second miscarriage for the singer and sources say that the couple is totally devastated and heart broken.

The singer lost a baby boy in 2008 when she was only four months pregnant. At that time she tweeted to her followers saying “Say a little prayer.” This time too, the 25 year old singer, Lily Allen was rushed to the hospital after a pain in her stomach. The doctors tried desperately to save the tiny life in her womb, but to no avail. One of her friends said that it is being very hard for Sam Cooper to cope with the mishap and it is a nightmare for the couple. Lily Allen still does not know how to deal with it. The source said that the singer loved flaunting her pregnant figure and was totally excited about being a new mom. After her first miscarriage, Lily Allen did not want to take any further risk and used to make regular visit to the doctors. She did not disclose her pregnancy until three months, when the doctor said that every thing is under control. In August she told her fans that she was absolutely to be pregnant. However, for the second time, she unfortunately lost the prospects of being a mother, which she has been longing for.

Lily Allen and Sam Cooper have been dating since last July. Sam Cooper is a painter and decorator and the couple together runs a decorating firm, called ‘the love of my life’. They even bought a 3million, six-bedroom house in Costwolds, where they wanted to start a new family life with the unborn child.