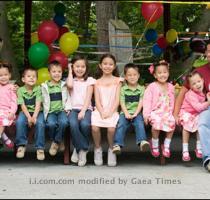 PENNSYLVANIA, (GaeaTimes.com)- Kate Gosselin has always made it to the newspaper for her little kids. It started when six years ago she delivered sextuplets and became quite famous. Yesterday, the same kids brought her to the news by probably jeopardizing their future. Two of her sextuplets, namely Alexis Faith and Collin Thomas, have been expelled from their school for misconduct.

The two kids of Kate Gosselin used to go to a Pennsylvania private school. It was reported to a famous magazine that these two kids got involved in a fight with their peers, made fun of them and called them by nasty names. All her kids are apparently suffering from “rage issues” after being featured in the TLC reality series “Kate Plus 8.” It has disturbed their mind and developing a lot of behavioral problems in them. A close family friend reported to a magazine that these two Kate Gosselin’s Kids used certain languages which they are not supposed to use of know at this age. They have been expelled due to their mis behavior and lack of courtesy. Kate Gosselin however did not want to discuss about this issue and wants to protect her children from the public glare and infamy for this matter. However, their father and Kate Gosselin’s ex- husband, Jon Gosselin seems to be more concerned about his children. He opposed the decision of featuring his kids in the TLC reality series “Kate Plus 8.” He even asked the judges to stop the show from airing several times. He could apparently feel the adversities involved in it.

He tweeted a few days back that they are children and they should be treated like one. They are not supposed to support themselves or even lead a lifestyle that suits an adult better. He claimed that he would not stop fighting for the until his children are removed from the television. He regrets for his and Kate Gosselin’s kids for being expelled from school. Alexis Faith and Collin Thomas will be home schooled now.