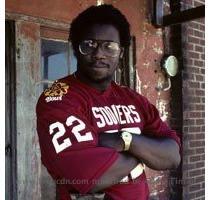 LOS ANGELES (GaeaTimes.com)- The latest episode of ESPN’s ‘30 For 30′ focused on the career of Marcus Dupree. The episode called ‘The Best That Never Was’ showcased the gifted athlete’s rather tragic path to oblivion. The show starts off in the present day where Marcus Dupree works as a truck driver and he is seen attending a football game at his old high-school, the Philadelphia High School. ESPN also goes back to Marcus Dupree’s days as a high-school football player where he was so feared by the opposition that most teams would squib kick the ball to avoid Marcus Dupree’s kick return for a touchdown.

The documentary highlights the fact that Marcus Dupree was one of the most gifted athletes of all times and his mistakes and misfortunes led him to remain unnoticed in a game in which he would have been one of the greatest. The film also highlights Marcus Dupree’s rise as a football player at the high-school level. In 1983, Marcus Dupree left the University of Oklahoma in spite of being the top back in the country because he did not get along with the coach. In spite of his magnanimous talent and sheer physical strength, the coaches found him difficult to manage because of his lack of discipline and his inability to train with the rest of the team.

A few years later after quitting University of Oklahoma, Marcus Dupree joined the USFL where he played for the Portland Breakers. Less than 2 years later, he suffered a bad injury that ruled him out from the NFL Drafts. In the film, Marcus Dupree shows the garage where he worked for three years after the injury and also mentioned that his mother used to sit in a chair at the garage to prevent him from committing suicide. His grit and determination led him to make it to the NFL finally and he ended his career after a two year stint with the Los Angeles Rams where he played 15 games in total.

BEIJING - Anthropologists have begun a study to ascertain if the European-looking Chinese in northwe...

Criticism ahead of Ashes opener gives Aussies an edge over England: Hayden