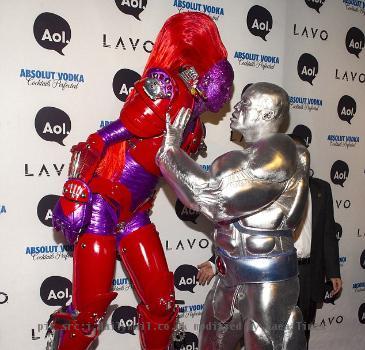 NEW YORK (GaeaTimes.com)- German American model Heidi Klum stole the show at her famous Halloween party in her giant alien robot costume on October 31, 2010. Heidi Klum’s annual 11th Halloween party at New York saw many celebrities enjoying the event while they attended the party wearing the outlandish costumes of their favorite characters. Heidi Klum was unrecognizable with her superhero costume and her husband Seal looked a character straight from the comic hero book of “Fantastic 4″.

Heidi Klum looked unrecognizable in her bizarre costume with her purple make up and built-in red stilts that elevated her to 8 feet. Heidi Klum told a reputed media source that she wanted to look like an alien ‘Transformer.’ She also said that she took few hours to complete her purple make-up and give herself a half bald look with red wig. The Victoria’s Secret angel said that walking in that unconventional costume was not that “hard” for her. On the other hand, her husband, singer Seal looked completely unfamiliar with his complete silver make up as he dressed himself as The Silver Surfer for Halloween party.

The eyewitnesses report that Heidi Klum somewhat looked like Electra, which is a character from Eighties musical ‘Starlight Express.’ Her costume was designed by Martin Izquierdo, who is famously known for designing her Victoria’s Secret Angel wings. Heidi Klum played the role of a perfect host at her Halloween party and welcomed every guest with warmth. The star studded gala event was attended by many other celebrities like Kim Kardashian who dressed herself as Little Red Riding Hood while Christian Siriano donned the costume of a naked maid. CoCo and Ice T dressed as a doctor and naughty nurse and singer Ashanti dresses as a cat.