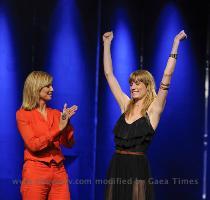 LOS ANGELES (GaeaTimes.com)- In what was a rather shocking ruling by the judges of Project Runway, Gretchen Jones was adjudged the winner of the season during the finale on Thursday. Though over the weeks Gretchen Jones was seen slumping after her initial win the challenges, she picked up her performance in the finale where she came up with a bizarre, bohemian collection called ‘Hippie-Hooker’. The judges that included the guest judge Jessica Simpson, were seen all praises for the collection by the winner. Andy South and Mondo Guerra, who were the other two finalists failed to make an impact in the finale, though some fans felt that Mondo Guerra’s collection was better than Gretchen Jones.

Jessica Simpson who appeared in a short glittering grey dress which showed off her curvy figure. With rumors floating around of her pregnancy, it looked like the pop star had the glow to fuel it. Heidi Klum on the other hand was her fashionable best in a bright orange formal attire that grabbed most of the eyeballs. Winner Gretchen Jones appeared in a see through skirt that allowed the onlooker a view of her oversized innerwear on the Project Runway finale.