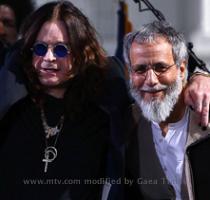 WASHINGTON DC (GaeaTimes.com)- The Rally to Restore Sanity or Fear turned out to be a huge treat for the music fans as some of the biggest stars were seen performing at the concert in Washington. Jon Stewart headed the pro-sanity part of the rally and introduced Cat Stevens who sang ‘Peace Train’. Interrupting him during the performance was the head of the pro-fear part of the Rally, Stephen Colbert who introduced rock icon Ozzy Osbourne on stage. The ‘Mama I’m Coming Home’ star sang a wilder version of ‘Crazy Train’. To draw the match came O’Jays who finally healed the differences between the two parts of the rally with ‘Love Train’.

Cat Stevens sang the soulful acoustic rendition of ‘Peace Train’ before he was interrupted by Stephen Colbert. Stephen Colbert spoke about the message of the song and then said that his train is arriving on stage now and the conductor had an important message to give out to the world. It turned out to be the perfect build up for the big show and the audience to already hear the legendary voice of the Prince of Darkness. To give out the message of the pro-fear rally, Ozzy Osbourne sang the hard metal number ‘Crazy Train’ which was interrupted by Jon Stewart towards the end. Jon Stewart complained that he was not comfortable with the train that Ozzy Osbourne sang about.

While the TV personalities argued on stage, Cat Stevens and Ozzy Osbourne were seen hugging each other and leaving. Soon the audience heard the soulful voice of the O’Jays who proved that there indeed was train which everyone could get on and it was the ‘Love Train’.