Night of Too Many Stars Lights up tonight on TV 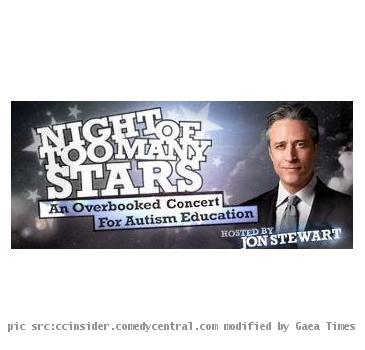 LOS ANGELES (GaeaTimes.com) — Make your evening joyous tonight by keeping an eye on the revelry titled as “Night of Too many Stars“. It is an overbooked concert for Autism education that took place at the Beacon Theater in New York on 2nd October. The evening was lighted up by a bevy of comedians including Stephen Colbert.

The glorious evening will be featured tonight on TV. Jon Stewart hosted the show. It was really a night of many stars as some of the industry’s biggest stars were present including Stephen Colbert, Jim Gaffigan, Chris Rock, Steve Carell and Triumph the Insult Comic Dog.

Comedy Central’s Night of Too Many Stars was a superb show that featured some exciting events like stand up, sketch comedy and short films. The show is conducted to raise funds that will be donated to the New York Center For Autism. This center is dedicated to provide social services, education and research for people affected by autism and their families.