Sunil Shetty To Take A Sabbatical From Films 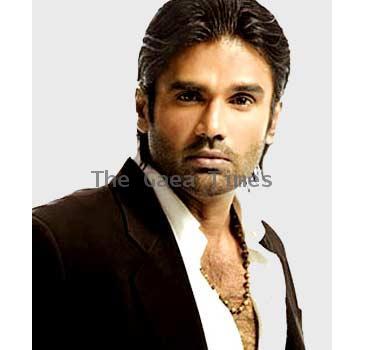 September 17, 2010 (Sampurn Wire): Of late Suniel Shetty has been saying no to a lot of filmmakers, including his favourite Priyadarshan.Yes, Sunil would rather play the house-husband than do roles that do scant justice to his presence. Suniel Shetty who has just returned with a new career plan from a long schedule of Anees Bazmi’s Thank You in Toronto is ready to do a complete career revamp. After the much-acclaimed part in Red Alert, there will be no more peripheral parts for Sunil. Now that his two children are stepping out of adolescence, Sunil wants to spend as much time with them as possible before they leave home.

He will no more do supporting roles and cameos even for friends. He has just said no to Priyadarshan for a role in a new film featuring Ajay Devgn, Anil Kapoor, Kunal Kapoor, among others. Sunil had been all but finalized for one of the pivotal parts. Now one hears he is no more in the film. Sunil has said no a cluster of new films. At the moment, Anees Bazmi’s Thank You is his last assignment on hand.

Sunil explains, “The role did not shape up either to Priyan’s or my satisfaction. So we decided to part ways on this one. In fact, Priyan himself suggested I pass this one.”

So is there any ill-will between Priyan and Sunil over this matter? Laughs Sunil, “None at all. Priyan and I go back a long way. I’ve always done whatever he has offered me. But now it’s time for me to think about the next level in my career. I can’t be doing supporting parts any more.”

Both of Sunil’s children are growing. His daughter will be attending college next year. Rather than waste his time in inconsequential roles Sunil would spend time with his family. After completing the schedule in Toronto, Sunil flew to the US to be with his sister for Raksha Bandhan.

He returns to Mumbai with fond memories of his birthday in Toronto on August 11. Co-star and friend Akshay Kumar threw a surprise party for Sunil. Sunil was deeply moved by the care Akshay took over details at the party. “He didn’t only arrange the party, he looked into the minutest detail including the food I like. Akki knows I don’t drink. So he had arranged my favourite fruit juices. It was just a small party with our friends like Bobby Deol and Anees Bazmi. It was memorable evening.”

Sunil gets emotional over his friend with Akshay. “We started our careers at around the same time and we’ve done any number of films together. But do supporting parts with him? Thank You, but no thank you.”

GUANGZHOU - India's Ravinder Singh and Sunil Kumar Rana won a bronze each on the opening day of the ...

Jackie Shroff gets a slice of 'Hero'

PUNE - Bollywood actor Jackie Shroff was transported to the days of his hit film "Hero" when a flaut...

HYDERABAD - A Hyderabad court Saturday sent a key accused in the 2007 Mecca Masjid blast to judicial...

KOLKATA - A Maoist squad member and a suspected Maoist linkman were arrested Saturday from West Beng...

Mecca Masjid blast accused to be produced in Hyderabad court

HYDERABAD - The key accused in the Mecca Masjid blast case will be produced before a Hyderabad court...