Anil Kapoor On Camera, Aamir On Clapper Board For Sanjay Dutts Dhamaal! 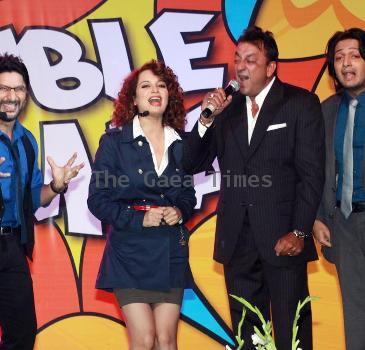 September 2, 2010 (Sampurn Wire): Producer Ashok Thakeria and Director Indra Kumar are celebrating 25 years of their association. On this occasion, they are launching their latest movie ‘Double Dhamaal’, starring Sanjay Dutt. And the interesting fact is that veteran actor Anil Kapoor is switching on the camera for the launch while Bollywood’s perfectionist Aamir Khan is sounding the clapper board for the ‘mahurat’.

Ashok Thakeria and Indra Kumar duo has given some hit films like ‘Dil’, ‘Beta’, ‘Raja’ and ‘Masti’ under their banner.

‘Dhamaal’ was a huge hit in 2007, which also starred Ritesh Deshmukh, Arshad Warsi, Aashish Chaudhary and Javed Jaffrey. The film did not have any heroine unlike other films of these days. Like the title of the sequel, hope it really does ‘Double Dhamaal’ at the box office also!