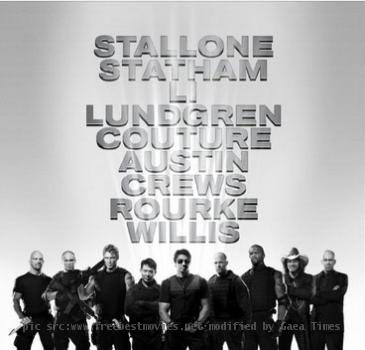 LOS ANGELES (GaeaTimes.com) — What do you expect from a Movie starring Sylvester Stallone, Bruce Willis, Jason Statham, Stone Cold Steve Austin and Jet Li among others? Yes you are right, the movie should be a long rush of adrenaline. Stallone in an interview said that the movie, ‘The Expendables’ was like “Sex And The City” but for a male audience. The good thing about the movie is that it is not pretentious. Sylvester Stallone, who also wrote and directed the movie knew that the audience of this movie do not want a good story and realization of the inner self, They want tons of explosions and action.

The movie plays like a homage to the 80’s action flicks like ‘Rambo’ and ‘Commando’. Those movies had wafer thin plots and often funny narratives but the movies were a raging success for their time. Sylvester Stallone’s latest movie is also in the same vein. The plot is very cliched. The macho men saves the girl (Giselle) in distress and ultimately saves the day. The movie is littered with funny one-liners from the actors. The action is the real star of the movie. The movie features some lightning fast martial arts from Jet Li, Sylvester and others at their usual best. The set pieces are truly spectacular. But some of the action sequences featured some really quick cuts and it was really a chore to keep track of what was happening.

Anyone expecting a Oscar worthy material from The Expendables should think again. But being the action fan I’d pay just to see the three superstars namely Sylvester Stallone, Bruce Willis and Arnold Schwarznegger sharing the screen for the first time. In all, leave your brains out in home for this movie and join in the fun. Share your thoughts about how you feel about the movie.