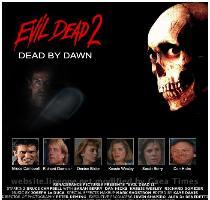 LOS ANGELES, (GaeaTimes.com)- Halloweens Day is probably the scariest day of the year. It can however get even more scary, if the day is celebrated by watching some of the scariest movies ever released. To make your Halloweens Day all more special and spooky, AMC has been celebrating “AMC Fearfest” all through out this month, that featured some of the best horror pictures and thrillers of all times. However, it seems that they had saved the best for the D-day, as the channel features “Evil Dead 2“, which is one of the most deadly movies released by Hollywood.

Nothing could be better than starting the Halloweens Day by watching “Evil Dead 2“. The movie was aired at 6:00 AM in the dawn, so that the fearful aura can linger in the minds of the audience all through out the day. In fact, that marks the main essence of Halloweens Day. “Evil Dead 2” was also featured yesterday night at 10:15 PM, for the same reason. This cult horror movie was released on March 13, 1987, and got a box office collection of a whopping $10.9 million. It was about the two main characters Ash Williams (Bruce Campbell) and his girlfriend Linda (Sarah Berry), who went for a holiday in a forbidden cabin in the woods. As they played the tape of an archeology professor and chanted the spells from the “Book of the Dead”, it aroused the dead spirits, to be followed by a string of horrifying consequences.