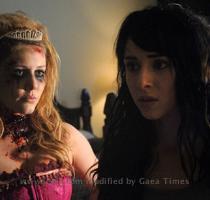 “My Super Psycho Sweet 16″ part 2 was premiered on MTV yesterday. The sequel takes the movie a step forward, and portrays the protagonist characters from a brighter angle. Skye Rotter, who was the violent teenage protagonist in the first responsible for a few murders ans several other psychotic acts will witness a vast difference in the new flick. She is on her way to settle in her life with peace of mind. For that, she is in search of her mother, who abandoned her when she was just an infant. As she finds her, she discovers that her mother is happily married for the second time and has a child too. Her mother and her half sister, will play an important part in this film. Skye Rotter, who wants to start a new life now, is still on a conflict, where her conscience wants her to change herself, yet she is bugged by her violent past and her killer father.

“My Super Psycho Sweet 16″ part 2, will star Lauren McKnight as Skye Rotter, Julianna Guill, Chris Zylka, Alex Van and Matt Angel as the only recurring characters. There has been incorporation of other characters too. The film has been directed by Jacob Gentry and produced by Alexander Motlagh and Maggie Malina. This 84 minutes film has been written by Jed Elinoff and Scott Alan Thomas, and distributed by POP films.