“The Walking Dead” Premieres On AMC 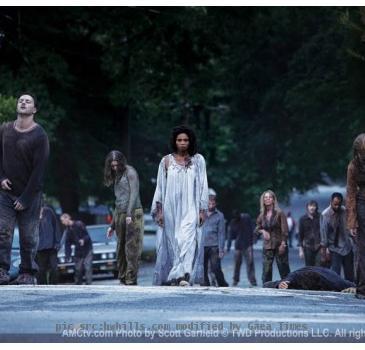 LOS ANGELES (GaeaTimes.com)- The story of an aftermath of zombie apocalypse, “The Walking Dead” premiered on AMC last night and the audience enjoyed the entertaining hours watching the show on television. “The Walking Dead” was based on a comic book series of the same name created by Robert Kirkman and Tony Moore. The show was subtitled as “Days Gone By” and it was written and directed by the creator of the series Frank Darabont.

“The Walking Dead” showed Andrew Lincoln in the role of a police officer Rick Grimes who after shooting rampage by the criminals goes under coma. However, when he wakes up, he finds a world is invaded by zombies which seemed to him to be a disorienting and post apocalyptic nightmare. When he goes out to take a look into the city he discovers that the roads are filled with pieces of dead bodies and also zombies everywhere. Rick Grimes meets a man (played by Lennie James) who tries to protect his young son. Lennie James lived up to the expectation of the people by getting into the skin of the character. The AMC new zombie series managed to pull in audience owing to its interesting plot.

“The Walking Dead” on AMC showed Rick Grimes’ desperation as he searches for his son and wife. However, in the end, the audience finds that his wife Lori has turned into a zombie. The audience also finds Rick in a state of shock when he finds out the truth about zombie invasion and also when he sees Lori as a zombie. Even if he tries to, he cannot pull the trigger to kill his wife. The premiere of “The Walking Dead” has received good reviews from the viewers and even some web portals have said it to one of the memorable events of the year.