Is Sylvester Stallone’s Height Too Much for His Co-Stars? 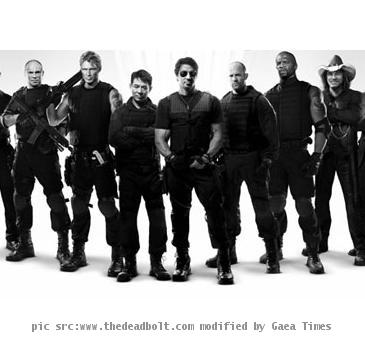 LOS ANGELES (GaeaTimes.com) — If you look closely to the poster of the recent hit film ‘The Expendables‘, you shall notice that Sylvester Stallone appears to be taller than most of his co-stars. But is he really that tall?

Actors like Bruce Wills, Mickey Rourke and UFC champion Randy Couture all range between 5 feet 11 inches to 6 feet in terms of height. According to most of the reports, Stallone’s height is said to be 5′9 or 5′10. So how can he look taller than other actors mentioned before?

It might be the arrangement of the cast in the poster which is causing an optical illusion. Stallone is standing between Jet Li (5′6) and Jason Statham (5′10). The other taller guys are standing at an angle to Stallone.

The illusion is so powerful that even Dolph Lundgren, the tallest man among the cast (6′4) is appearing to be same height as that of Stallone.

So, do you think that Sylvester Stallone is behind this fudge? Or it’s a clever marketing by the movie production team? Anything might be true. This is Hollywood we are talking about. Anything is possible here!