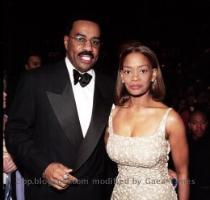 LOS ANGELES (GaeaTimes.com)- Recently comedian Steve Harvey was attacked over the Internet by his ex-wife Mary Harvey who has gone to post some videos that clearly speaks of her allegations against her former husband. Mary Harvey posted three videos on YouTube over the weekend where she accuses Steve Harvey for having cheated on her and making her go through a painful life.

In the videos whose full length comes to 25 minutes, Steve Harvey’s ex-wife said that he had forcibly evicted her out of their house and even turned their son against her. She infact stated that her ex-husband Steve Harvey had been cheating on her from the beginning of their relationship. Both Steve and Mary Harvey met each other in 1989 and after some years of courtship tied the knot in 1996. Their son Wynton was born a year later. She has spoken on the video of how she was shocked to discover of a love letter that was written to her husband by his mistress. She has lashed back at the funny man of having ditched her even after she had lent out her full support during their days of struggle when Steve Harvey’s career was taking a shape.

Steve Harvey’s ex-wife further disclosed that Marjorie Bridge whom Steve Harvey after he split from Mary Harvey in 2005 was actually the funnyman’s mistress. She even accused her husband of having held her responsible for not getting a show with Oprah Winfrey. Steve Harvey meanwhile has already taken to the law for defense. His attorney Bobbie Edmonds said that they will take action against Mary Harvey for having disclosed information over the web which is something forbidden by the law.

LONDON - Tall bowlers have the best averages, and according to England bowling coach David Saker, S...
Copyright© 2011 The Gaea Times